Welcome to the official attendee housing site for the 5th World congress on Biotechnology, Valencia Conference Centre (Palacio de Congresos de Valencia) Valencia,Spain. The Valencia Conference Centre also has the perfect solution to the parking problem. There is a large underground car park with closed-circuit television monitored by our security service and space for up to 600 cars. There are also two smaller outdoor car parks with room for 22 coaches or buses and 45 authorised vehicles. The Conference Centre has also disabled access to any part of the building. From Valencia airport to hotel distance is 9.4 km. In current traffic 9 minutes by route CV-365 and CV-35, 11 minutes by route V-30 and 12 minutes by CV-365.

The Valencia Conference Centre is situated on the major access route into the city from the north east. The Avenida de las Cortes Valencianas is one of the main avenues leading into the modern metropolis of Valencia. The Centre is ideally located. It is close to the international airport at Manises (Valencia Airport) and has excellent links into the city centre by metro, bus and tram.

Valencia is one of the oldest cities in Spain, founded in the Roman period under the name "Valentia Edetanorum" (138 BC).  It is the capital of the autonomous community of Valencia and the third largest metropolitan area of Spain with a population ranging from 1.7 to 2.5 million. The city is situated on the banks of the Turia, on the east coast of the Iberian Peninsula, fronting the Gulf of Valencia on the Mediterranean Sea. Valencia has a subtropical climate on the borderline of the Mediterranean climate and semi-arid climate with very mild winters and long warm to hot summers. Its average annual temperature is 22.3 °C (72.1 °F) during the day and 13.4 °C (56.1 °F) at night.

Its historic centre is one of the largest in Spain, with approximately 169 acres; this heritage of ancient monuments, views and cultural attractions makes Valencia one of the country's most popular tourist destinationsMajor monuments include Valencia Cathedral, the Torres de Serranos, the Torres de Quart, the Llotja de la Seda (declared a World Heritage Site by UNESCO in 1996), and the Ciutat de les Arts i les Ciències (City of Arts and Sciences), an entertainment-based cultural and architectural complex designed by Santiago Calatrava and Félix Candela.

Valencia enjoyed strong economic growth over the last decade, much of it spurred by tourism and the construction industry. Many local landmarks were restored, including the ancient Towers of the medieval city (Serrano Towers and Quart Towers), and the San Miguel de los Reyes monastery which now holds a conservation library. The city has numerous convention centres and venues for trade events, among them the Feria Valencia Convention and Exhibition Centre (Institución Ferial de Valencia) and the Palau de congres (Conference Palace), and several 5-star hotels to accommodate business travelers. Valencia is known internationally for the Falles (Las Fallas), a local festival held in March, and for paella valenciana, traditional Valencian ceramics, intricate traditional dress, and the architecture of the City of Arts and Sciences designed by Santiago Calatrava and Félix Candela. La Tomatina, an annual tomato fight, draws crowds to the nearby town of Buñol in August. There are also a number of well-preserved traditional Catholic festivities throughout the year. Holy week celebrations in Valencia are considered some of the most colourful in Spain. Valencia has a metro system, the Metrovalencia (Valencia Metro).Valencia is the current location of the Formula One European Grand Prix, first hosting the event on 24 August 2008. The city will host the event until at least 2014. Valencia is famous for its gastronomic culture; typical features of its cuisine include paella, a simmered rice dish with seafood or meat (chicken or rabbit), fartons, buñuelos, the Spanish omelette, rosquilletas and squid (calamares).

In Valencia Public transport is provided by the Ferrocarrils de la Generalitat Valenciana (FGV) which operates the Metrovalencia and other rail and bus services. The Estació del nord (North Station) is the main railway terminus in Valencia. A new temporary station, Estación de València-Joaquín Sorolla, has been built on land adjacent to this terminus to accommodate high speed AVE trains to and from Madrid, Barcelona, Seville and Alicante. Valencia Airport is situated 9 km (5.6 mi) west of Valencia city centre. Alicante Airport is situated about 170 km (110 mi) south of Valencia. The City of Valencia also makes available a bicycle sharing system named ValenbiSi to both visitors and residents. 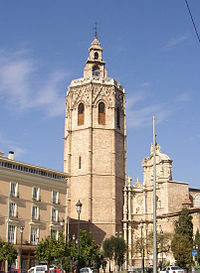